From the Wailers to Al Green to Small Faces, the Oscar-winning director selects his favourite tunes from the world of his acclaimed series of films.

The title tune, which was never actually in the series, mainly because we couldn’t afford it! It’s sort of self-evident: if we all come together, we can move mountains. And if anything, that has been proven over the last year, especially with the Black Lives Matter movement, #MeToo and others. It goes so well with what was going on in the series. We as individuals can do huge things.

It’s in the scene when Alex Wheatle (Sheyi Cole) is introduced to Brixton for the first time, and it’s exactly what I wanted because this is a feeling of wellbeing, a feeling of being whole, in a place where you felt you could be yourself. It’s the first reggae tune we play so it’s got to be something like that.

How Can You Mend a Broken Heart?
Al Green

I love it because it’s so deep and out there. It’s on the radio in Red, White and Blue when the father drives Leroy (John Boyega) to the police training centre, and then he gets out and embraces him. It was them coming together as two men who have opposing views. As a person with West Indian parents, for your father to hug you, that’s a rare thing.

What’s so interesting about lovers rock as a genre is that for men it was hugely beneficial, because before that it was sort of righteous music, “Jah rastafari!” It was a situation of almost having to be warriors within the dance. [Lovers rock] provided a moment of allowed vulnerability; the possibility to love and to be loved.

I saw it in my mother’s records and put it on and I was like: ‘Wow!’ It messed with my head because I didn’t know, aged nine, in 1979, that skinheads were basically imitating Black Jamaican kids with their cropped hair and three-quarter pants. It’s a very West Indian-British tune.

Pressure Drop
Toots and the Maytals

The harmonies on this are amazing. I use it right at the end of Mangrove, when Frank comes outside to smoke and his friend says: “We might ah won the battle, but we’ll see about the war.” And that was it. The Mangrove Nine was a rare victory in the narrative of that time, but it was a victory nevertheless.

When I first heard it I was a kid, going crazy, jumping around, hitting people, trying to be Bruce Lee. When we were doing our research it was novelist Alex Wheatle, who we did [one of our] films about, who told us that it was a song that was very popular at blues parties. Amazing.

Silly Games was, like, the anthem. Love is the most vulnerable situation you put yourself in, but the reward of putting yourself in that situation is tremendous. Everyone is sort of dipping their toe in the water, inching closer to each other, so “Stop playing silly games”, just do it. Like: come on, let’s take the chance. So yeah, it’s beautiful.

My mother loved Small Faces and this was from her record collection. She had a lot of 45s she kept in her 60s radiogram. When I was at school there was a mod revival so I remembered that tune. Just the power of it, really. It’s always about something; it’s white, working-class angst. It’s heavy. I love it.

(Somebody) Help Me Out
Beggar & Co

I saw them on Top of the Pops, this huge funk band, and they were amazing. When you did see these bands on TV everyone used to ring each other: “Oh my God, there’s Black people on!” It was confirmation of our existence. The sadness about this time in British music is that a lot of these people didn’t get their dues because they were Black.

A Guide to the Discography of British Reggae Architect Dennis Bovell 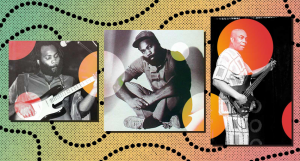